CMA CGM has announced the launch of its new MEDGULF service, aiming to offer full coverage from West Mediterranean to US Gulf and Mexico.

The service will commence at the end of September and will be operated by six container vessels.

The first departure will be on 29 September from the port of Genoa. 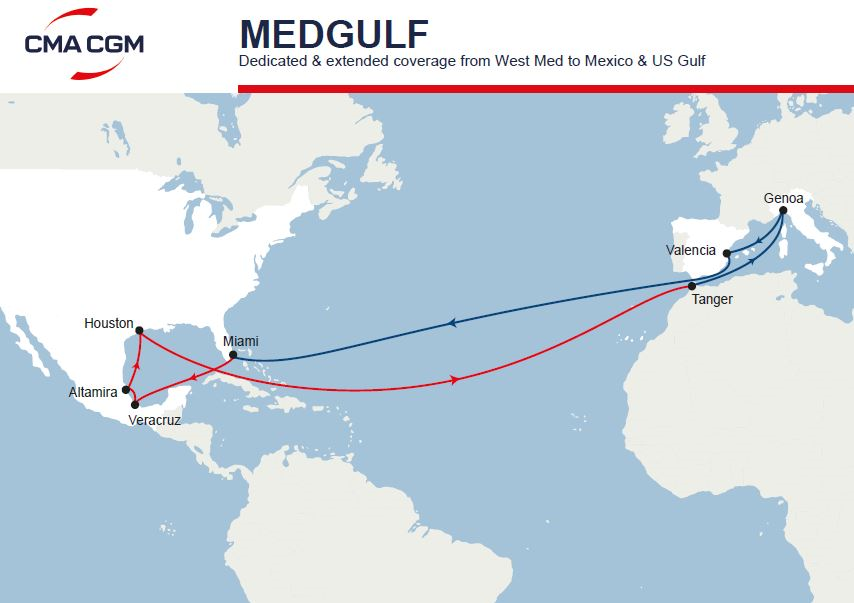 “This improvement of CMA CGM’s offering with this exclusive service between West Med, US Gulf & Mexico reinforces the Group’s global coverage in order to meet customers’ expectations and needs,” commented the Marseille-based box line in a statement.

THE cost of shipping an FEU from China to the US west coast stood at US$5,400 recently, down 60 per cent from January, according to the Freightos Baltic Index, reports the Wall Street Journal.

An FEU from Asia to Europe cost $9,000, down 42 per cent during the same period. The rate for both routes, while still above pre-Covid levels, peaked at more than $20,000 last September.

Market conditions have made a sharp reversal from earlier in the pandemic. Freight rates jumped roughly 10-fold in 2021 because supply-chain disruptions, port backlogs and a surge of cargo left importers scrambling for space on box ships.

Some big retailers such as Walmart even chartered their own vessels to get around bottlenecks.

This year, Walmart and other retailers ended up with too much inventory after they raced to import goods earlier than usual, anticipating shipping delays and demand that didn’t materialise.

Manufacturers, too, moved goods earlier than usual. Apparel sellers such as Gap and toy makers including Hasbro reported spring surges in inventory levels that normally occur closer to the holidays.

“For spot rates, the party is over,” said Jonathan Roach, a container shipping analyst at London-based Braemar. “The backdrop of a potential global recession, driven by surging energy prices and rapid inflation, is driving down the market.”

“There is a cargo downturn due to less demand and more open space,” said a carrier source. Everybody is panicking and trying to chase more cargo by competing on rates, reports London’s S&P Platts.

“Carriers are going to learn a hard lesson now, everything that goes up must come down,” a US-based manufacturer source said. “Everybody’s swimming in inventory, especially in the US. Shipments will continue to fall, and with them freight rates.

“The tables have turned,” the source said, “We’ve gone from looking for vendors to move/transload our products to vendors who can now offer storage.”

The average China Containerised Freight Index (CCFI) went down 2.5 per cent to 2,830.11 from the previous week, according to the exchange.

The sub-index for the Persian Gulf/Red Sea service led the decrease with a week-on-week drop of 6.7 per cent.

Bucking the trend, the sub-reading for the South Africa service rose one per cent from a week earlier.

The CCFI tracks spot and contractual freight rates from Chinese container ports for 12 shipping routes across the globe, based on data from 22 international carriers.

This follows a China Ports and Harbours Association report of 5.3 per cent growth in container volume at eight major Chinese ports year on year in mid-August, reports the UK’s Seatrade Maritime News.

Crude oil shipments at major coastal ports declined 0.2 per cent. The Port of Tianjin posted the highest rise in volume with a growth rate of 53 per cent.

Due to a heatwave and lower than normal rainfall, shipping channels of Yangtze River were narrowing, negatively affected cargo movement