Staff at Evergreen’s compatriot rivals have become envious after Taiwan’s largest liner operator gave some employees a year-end bonus of as much as 40 months of their salaries.

The bumper bonus was revealed when an Evergreen employee shared a screenshot of funds the company deposited into his bank account. 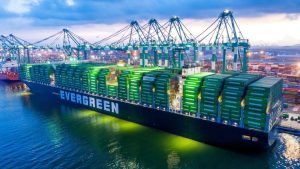 Evergreen has achieved a cumulative net profit of US$5.69 billion for the first nine months of 2021 and stock analysts believe the company’s full-year net profit could be around US$7.24 billion.

In 2020, Evergreen booked a net profit of US$860 million and dished out 10-month bonuses to staff. As the company’s 2021 earnings are predicted to jump nearly 10 times, staff bonuses have also grown.

Staff at Yang Ming Marine Transport, which is said to be considering an eight-month bonus, are understood to be displeased at the wide disparity with Evergreen’s bonuses, even though Yang Ming had been struggling before Covid-19 struck and caused supply chain bottlenecks that powered carriers’ earnings.

Taiwanese media reported that some Yang Ming staff have given feedback requesting the company to match Evergreen’s bonuses but the company has asserted that bonuses are based on the performances of the company and individual employees.

Over at Wan Hai Lines, which gave out eight-month bonuses in 2020, is reportedly reviewing a 24-month bonus. The company has not made any comment on bonuses for 2021.