The Marine Bunker Exchange (MABUX) World Bunker Index has continued to grow steadily on the second week of the year, continuing the upward trend that started from the first week of 2022. 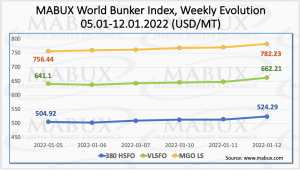 The weekly average Global Scrubber Spread (SS), the difference in price between 380 HSFO and VLSFO, has shown a moderate decline during the week to US$134.58.

At the same time, SS Spread in Rotterdam increased slightly to US$124.83. On the contrary, the average weekly SS Spread in Singapore fell to US$183.

“SS Spread indicators in the major hubs are still above the psychological US$100 mark,” commented MABUX. 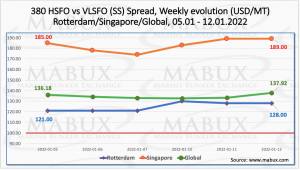 Meanwhile, a flotilla of liquefied natural gas (LNG) from the US has arrived in Europe, increasing LNG imports to Europe to a two-year high.

Fresh supplies of LNG are helping to ease supply problems, but stockpiles are still at very low levels for this time of year, according to MABUX officials.

The price of LNG as a marine fuel at the port of Sines, Portugal on 10 January decreased to US$2,397/MT, nevertheless more than three times higher than the price of MGO LS.

In Rotterdam, it was plus US$3, in Fujairah plus US$2 and in Houston plus US$12. The only port where the MABUX MBP / DBP Index registered an underestimation of the 380 HSFO is Singapore with a minus of US$13. Meanwhile, 380 HSFO Index fluctuations are close enough to the 100% correlation point.

VLSFO fuel grade, according to the MABUX MBP / DBP Index, remained overpriced in all selected ports: plus US$6 in Rotterdam, plus US$49 in Singapore, plus US$41 in Fujairah and plus US$1 in Houston. As for the VLSFO overcharge margins at all major ports, they are gradually decreasing.

Additionally, the MGO LS, the MABUX MBP / DBP Index recorded an underestimation of this fuel grade in two of the four selected ports: in Rotterdam by minus US$36 and in Singapore by minus US$28.

In Fujairah and Houston, the Index showed an overestimation of US$15 and US$2, respectively. Thus, the MABUX MBP / DBP Index for MGO LS does not yet have any firm trend so far.

According to Chinese officials, the LSFO export quotas hike “lends support to a further increase in Chinese production of the marine fuel” and is also “a reflection of China’s drive to establish itself into a bunker fuel hub in Northeast Asia.”

Currently, there are now 251 LNG-fuelled vessels in operation and 403 on order, according to DNV statistics. It is notable that orders are now building across a wider range of vessel segments.

As for container ships, there are currently 28 LNG-fuelled in operation and 98 on order, while 25 crude oil tankers are in service with an order book of 55 vessels. The order tally for car carriers is now 56, and for bulk carriers and cruise ships, it is 49 and 26, respectively.