Hapag-Lloyd nears US$15 billion profit from January to September

Hapag-Lloyd nears US$15 billion profit from January to September

According to Hapag-Lloyd’s release, the first nine months of 2022 have been quite profitable for the company.

For the same period, Hapag-Lloyd has seen its profit climb to US$14.7 billion.

According to the company, the first nine months of 2022 were marked by disruptions in the global supply chains, which resulted in longer turnaround times for ships and containers.

At the end of the third quarter, there was weaker demand for container transports and consequently a slight easing in the shortage of available transport capacities.

Hapag-Lloyd’s box volumes were on par with the prior-year level, at 8,987,000 TEUs, while its revenues increased to US$28.4 billion. This can mainly be attributed to a significant increase in the average freight rate, to US$2,938/ TEU and a stronger US dollar. 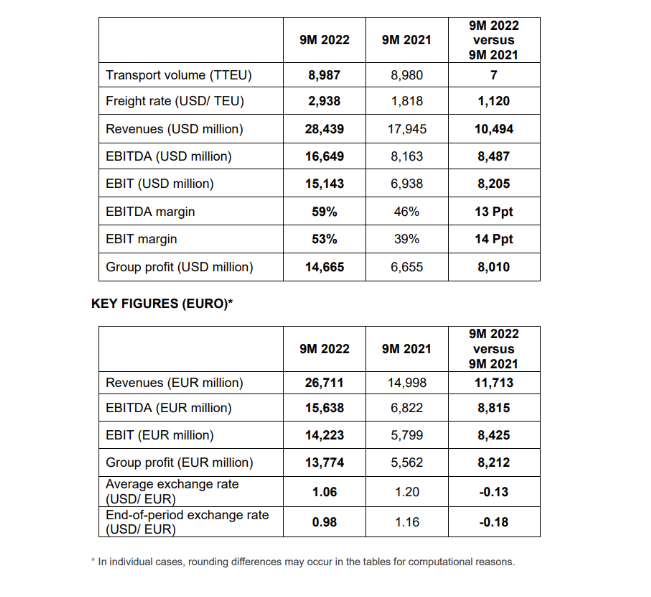 Additionally, Hapag-Lloyd reported that its transport expenses climbed to US$10.8 billion. This was due in part to a significantly higher bunker consumption price, of US$755 per tonne, and higher expenses for container handling.

“In the coming months, the strained situation in the global supply chains should continue to normalise. At the same time, our strong balance sheet will help us to stay on course even in difficult waters,” commented Habben Jansen, CEO of Hapag-Lloyd AG.

He added, “We will stick to our strategic agenda while investing more in quality and growth as well as in the further decarbonisation of our fleet. One very significant focus is investment in infrastructure, which we are using to further expand our terminal portfolio.”