OAKLAND’s largest marine terminal, Oakland International Container Terminal (OICT), has started to reap the benefits of the newly introduced surcharge for boxes that remain at the facility for an extended period.

The removal of long-dwelling containers at OICT has gathered pace with the fee. “We are seeing a pretty remarkable improvement,” said Ed DeNike, president of SSA Containers, which operates OICT, reports IHS Media.

With laden import containers dwelling at OICT twice as long as normal, and the terminal’s service suffering as a result, Oakland’s largest terminal operator implemented the fee on December 1. 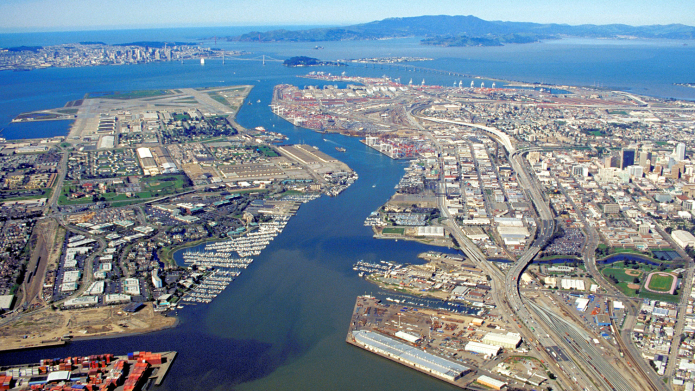 OICT’s “extended dwell-time fee,” which is charged to cargo owners, begins on the eighth day that a laden import container has been sitting on the terminal.

The US$50 per-day fee increases to $75 on days 13-17, and to $100 on days 18-22. The fee tops out at $150 beginning on day 23 and is charged each day until the container is removed, according to an SSA customer advisory. Empties and laden export containers are not subject to the fee.

“We have to do it,” said Mr DeNike. “These import containers [were] not moving.”

OICT handles about 70 per cent of Oakland’s container volume. Bryan Brandes, maritime director for the Port of Oakland, said port-wide dwell times have increased to more than six days on average from less than four days earlier this year.

The other three container terminals in Oakland have not announced plans for extended dwell-time fees, Mr Brandes said, although the marine terminals and two railyards are all contending with the same operational issues of longer turn times for trucks and chassis shortages.

Port says congested warehouses at root of problem. Importers are letting their containers sit longer on the terminals because they have nowhere to take them.