Orient Overseas Container Line (OOCL) has reported revenue of more than US$15.68 billion during the fiscal year (FY) ended on 31 December 2021, which translates to a growth of 110.2% compared to the previous year.

In the meantime, total liftings increased by 1.7% over the last year, while loadable capacity presented a marginal rise of 0.2%, and the overall load factor was 1.3% higher than FY 2020.

Moreover, the average revenue per TEU increased by 106.7% year-on-year, according to the Hong Kong-based liner operator.

Furthermore, during FY 2021 the COSCO-owned shipping line registered a slight growth of 1.7% in container throughput year-on-year, by moving 7,587,158 TEU. 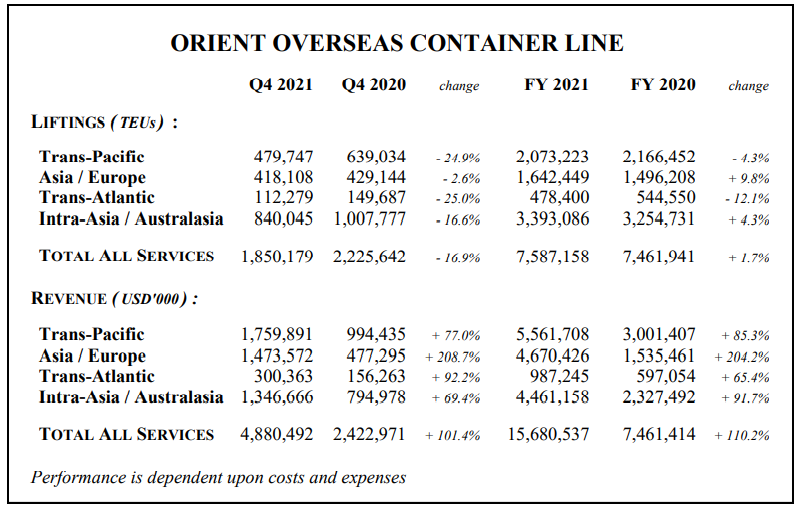 Regarding the fourth quarter of 2021, OOCL’s total revenues completed US$4.88 billion, reflecting an increase of 101.4% compared to the same period of the previous year.

This record result was achieved despite severe congestion around the network, which drove down liftings by 16.9% and loadable capacity by 14.3%, according to OOCL, while the overall load factor declined 2.7% year-on-year.

In addition, during Q4 the overall average revenue per TEU increased by 142.3% over the corresponding period of the previous year.