Even more chaotic for global supply chains will be this year’s rise in cargo in the peak summer period, compared to the peak period of 2021, according to forwarders, traders and shippers who took part in a survey.

The latest Container xChange survey titled “xChange Industry Pulse Survey” found that 51% of respondents expect the 2022 iteration of the peak season to be “worse” than last year.

26% predicted that this year’s peak season would be less chaotic than in 2021, while 22% expect the level of “chaos” to be the same.

Traditionally the peak shipping period is the third quarter of each year, as retailers build up inventories before the fourth quarter of the holiday and shopping season. Last year, cargo increases led to record container freight rates, delivery delays, port congestion and reliability of container shipping services.

Regarding the container sourcing strategy this year, compared to pre-pandemic times, 56% said they had been “growing networks”, 38% said they had agreed to “long-term contracts” and 25% said they had followed a “multi-tender strategy” (Figure 1). 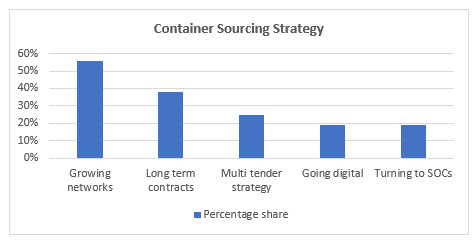 What has been your container sourcing strategy in 2022, how is it different from pre-pandemic times (Multiple choice question)

37.5% of respondents said they were ensuring clients received enough inventory by “shipping early” in 2022. 25% were “using alternative shipment routes” and 18.8% were contracting long-term slot agreements with carriers.

Also, 62.5% said they were still relying on the spot market or doing nothing specific to ensure shipments reach clients.

The impact of Covid lockdowns in China trade

58% of respondents also reported that Covid lockdowns in China had made it “hard to produce/ship as much product as planned”, suggesting that cargo backlogs and unsatisfied demand are building as China’s zero-Covid strategy limits exports to Europe and the US.

“Predicting exactly what will happen in this year’s peak season is harder than normal because there are so many contradictory signs and intangibles,” said Christian Roeloffs, co-Founder and CEO, of Container xChange.

“In terms of the supply of cargo, we’ve seen that Chinese Covid-19 lockdowns have affected the availability of cargo for export to key markets in Europe and North America. One big question is whether China is going to sacrifice its zero Covid-19 policy to get trade and its economy moving again.

“If it does, then there’s every sign that we’ll see a substantial surge as backlogs of exports is shipped. If lockdown rules are relaxed soon and truckers are allowed to get back to work, then those backlogs will be arriving at the same time as peak season orders which could cause a lot of supply chain blockages at ports in Europe and the US where congestion is already widespread.

“However, there are very few indicators so far that President Xi is willing to compromise health policy to boost trade. Indeed, it might not be politically expedient for him to do so with the Communist Party National Congress set for later this year when he is expected to be endorsed for a third term.

“The other side of this coin is demand, of course. Whether it is GDP forecasts, Purchasing Managers’ Index (PMI) numbers, rising inflation or consumer confidence, multiple metrics suggest demand could be deflating. So that could help offset any sudden rush of cargo from China, especially when there are also signs that consumers are spending more on services instead of products.”

The top challenges identified by respondents, in addition to China’s ongoing lockdowns, according to the survey, were container availability, full warehouses, inflation, the Russia / Ukraine crisis and rising prices.