The coming pile of empty containers

The coming pile of empty containers

Sea-Intelligence has reported that the delays and bottlenecks in the container supply chain will begin to improve at some point and eventually we will see supply chains revert to normality.

Whilst welcome news for all stakeholders, this transition will create another problem – a large pile of empty containers on the import side, which cannot readily be handled as part of the normal flows, according to the latest analysis of the Danish company.

“In issue 552 of the Sunday Spotlight, we created a model using Ocean Timeliness Indicator (OTI) data published by Flexport to estimate the effect of the increase in transportation time, based on the scenario that the bottlenecks will begin to slowly be resolved starting from mid-February 2022 and we will have returned to normal operations by end-December 2022. This means the current transportation time of 112 days will have reverted to 45 days by the end of 2022,” explain the Danish analysts.

Alan Murphy, CEO of Sea-Intelligence, said that in the scenario of steady operational improvement, we reach a stage where from July 2022 to February 2023 we will see almost 30% more containers returned to the depots in the USA than there is vessel capacity able to move them back to Asia.

“Based on this daily flow model we created, we can calculate the magnitude of the number of containers which will begin to pile up in the USA,” he added.

This is shown in the following figure. 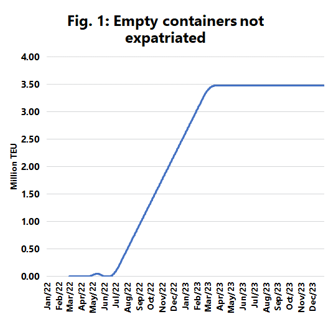 “Applying this to the flow changes we modelled in our analysis, the shortening of the supply chain will lead to a pile of 3.5 million TEU of containers which cannot be expatriated within the planned network operations. This has the potential of overwhelming the empty container depots in the US,” noted Murphy.

This pile is created within a period of 10 months, and if this is to be resolved within the existing network, it would require that the carriers operate with 82,000 TEU of empty slots on the head haul for 10 months.

“In reality, this means that an entirely predictable ripple effect from the pandemic will be a significant problem with empty containers in the US reaching far into 2023,” concluded Murphy.