The Drewry’s World Container Index (WCI) saw yet another week of fall, by 7% to US$2,404, primarily on the back of tumbling rates in the China-Europe trade lanes.

The Drewry’s World Container Index has now seen 90% of its gains, from its quote at the onset of the pandemic to its peak level in 2021, erode in just 14 months, even as it took 22 months to scale up to its highest level. 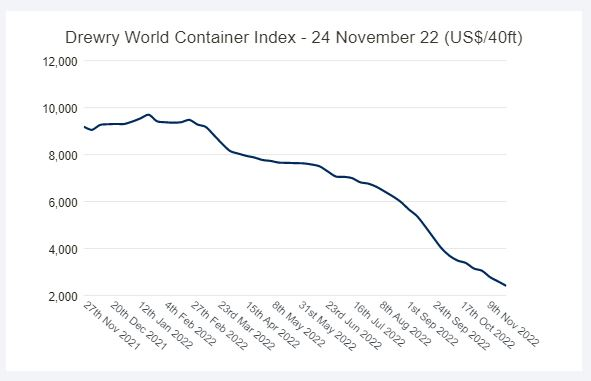 The descent has been quicker than the rise, owing to an extremely weaker demand scenario, while the rise was primarily on supply chain disruptions and contingencies. As the world economies brace for some amount of recession, the rates are expected to slow down further until the Chinese New year (Feb-Mar 2023).

Earlier this fortnight, Chinese exports were reported to have shrunk by 0.3% in October 2022, a first in months, despite better-than-expected numbers in September 2022. The shortage in demand has been reflecting severely with the spot rates, despite cancellations in terms of services (13% services cancelled) and blank sailings.

The Shanghai-Rotterdam prices tumbled by 18% over the week, sliding beneath the Composite Index quotes to record a quote of US$2,192. The trade lane has seen price erosion of 84% over the past year, overtaking the other trade lane counterparts (China-US and China-Mediterranean) in its deceleration. This is the first time in two years that the rates have been below the Weighted Composite Average. 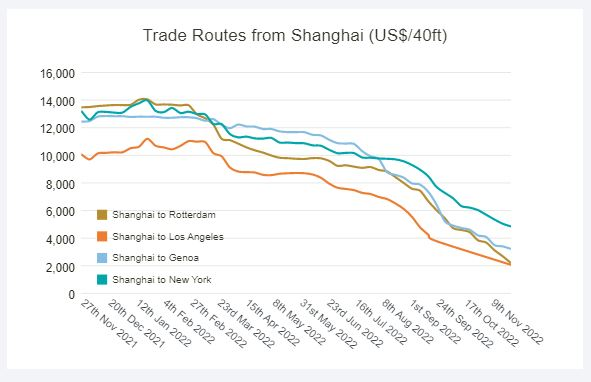 An interesting analysis of the WCI, which is now at a 26-month low, reveals that the index has slipped more in November, despite another week to go, than it did in October. However, September 2022 has been its worst ever, which was primarily triggered by falling China-US rates. 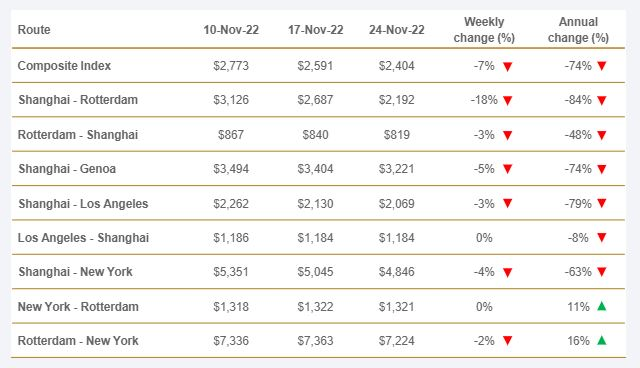 Author of the article: Gautham Krishnan is a logistics professional with Fluor Corporation, in the area of project logistics and analytics, and has worked in the areas of Project Management, Business Development and Government Consulting