Feedering Analysis 2022: Trades, Operators, Hubs was issued by Dynamar early in the year. It is the continuation of a series of studies covering this shipping sector that started in 2004 and was rebooted in 2018.

The ten largest feeder carriers provide around two-thirds of global feeder Annual Trade Capacity[1]. This means that the remaining third is in the hands of around ninety carrier groups. From out of the top ten, only three are not intercontinental or mainline carriers: X-Press Feeders, Unifeeder and Sinokor. 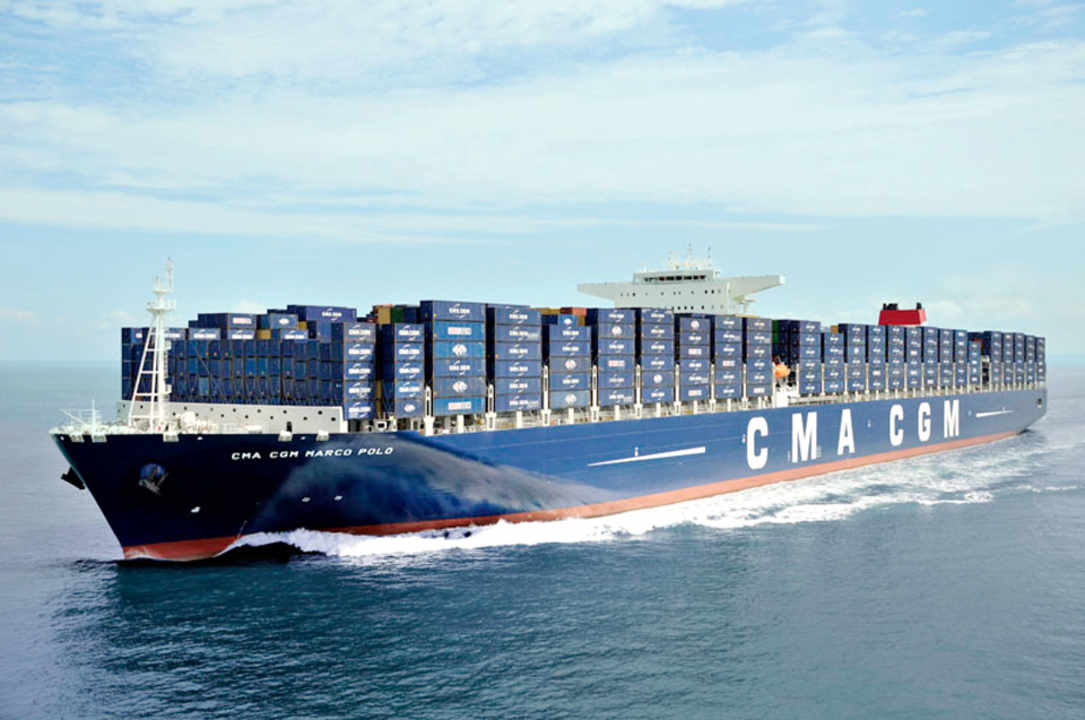 Leading the feeder list is MSC, recently crowned as the world’s largest container shipping line, it is a dedicated feeder operator carrying, principally, its own mainline cargoes. With its recent acquisition of a majority stake in Log-In Logistica, going forward, a small segment of its feedering activities will now also include a marginal common carrier element whereby these services are intended for a range of principals.

MSC is also only one of three feeder operators directly active in all seven main feeder trades. Second placed Maersk, operating in both dedicated and common sectors when including SeaLand, is also one of those present on all seven main trades.

The third carrier present on the main feeder trades is X-Press Feeders. It is not a mainline operator and is, with no contradiction intended, a global feeder carrier. It is ranked fifth overall by Annual feeder Trade Capacity, also behind the CMA CGM and Cosco groups. These two operate integrated mainline, regional and feeder networks on a similar scale as MSC and Maersk. That X-Press finds itself in such a context when looking at feedering is indeed testimony to its operational scope and scale. And it is one that has been added to with the recent launch of a true intra-West Africa feeder loop.

Just behind X-Press in sixth place is the ambitious and recently expansive Unifeeder. Buoyed by the Feedertech and Transworld acquisitions over 2020-2021, it now encompasses Middle East and Indian Subcontinent aspects in its shortsea portfolio. These go alongside its North Europe and Mediterranean home trades. Unlike X-Press, which is a pure feeder, Unifeeder also engages in the regional cargo segments. However, given its rate of progress and backing, it would not be a surprise to see Unifeeder edge closer to all those above it. 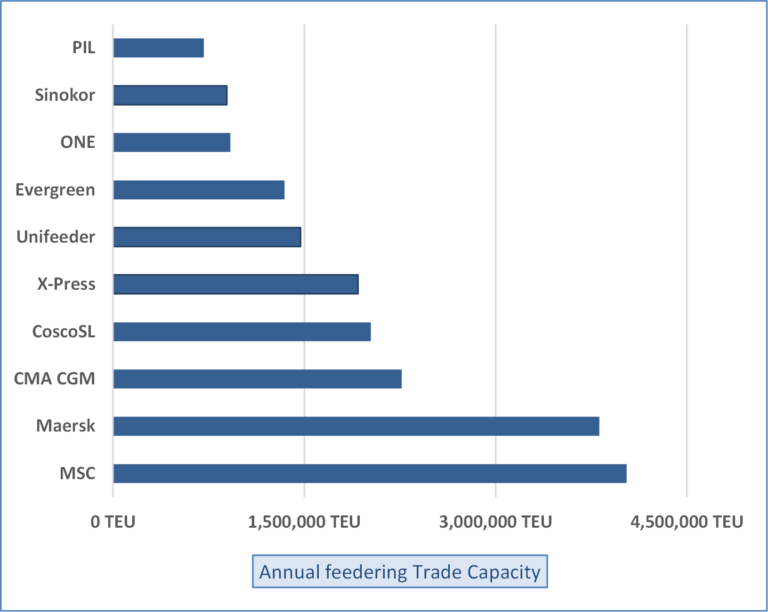 Service connections are vitally important for any port although for the most part, they are the happy result of a coincidence of geography and trade routes. As any real estate agent will say, the three most important characteristics of any property are location, location, location. However, with  transhipment – and feedering is a function of transhipment – there is a certain amount of discretion that the mainline carriers can exercise in deciding where transhipment takes place. The designation of a mainline carrier’s preferred hub is further guided by any interests it may have – vested connections if you will – in ports or terminals.

When looking at the connectivity of the main hub ports, Busan and Singapore demonstrate the primary importance of location, laying as they do alongside major trade flows. That they occupy the top spots is maybe not such a surprise. However, for others, it could be.

The Cosco group’s position and investments at Piraeus have clearly benefitted that port. It is now the third busiest in the world by weekly feeder service calls. Fourth placed Istanbul (Ambarli) has facilities in which MSC’s Terminal Investment Limited is involved and Marsaxlokk (ninth) is associated with CMA CGM and Terminal Link.

Other ports also featuring quite high that benefit from the connections with a particular mainline patron include Tanjung Pelepas (Maersk – 15th), Gioia Tauro (MSC – 18th), Tekirdag (MSC – 20th) and Kingston (CMA CGM – 21st). So, having a generous patron is clearly desirable.

However, transhipment is a transient activity that a carrier can always switch to an alternative. Although a rare event, especially given the investments concerned, the experience of Taranto is always instructive.  Evergreen used to control the container terminal at this port on the southern “heel” of Italy, ostensibly a fine location for a transhipment port. Indeed, Evergreen used it as its favoured Mediterranean hub until a change of policy in 2011 saw it switch to Piraeus. As a result by 2015, Taranto’s handlings were zero. Only nine years earlier it had handled nearly 900,000 TEU. There might be a revival in store of Taranto, especially now its container terminal is operated by the Yildirim group who just happens to be a significant shareholder in major liner operator, and ranked third in this study, CMA CGM. 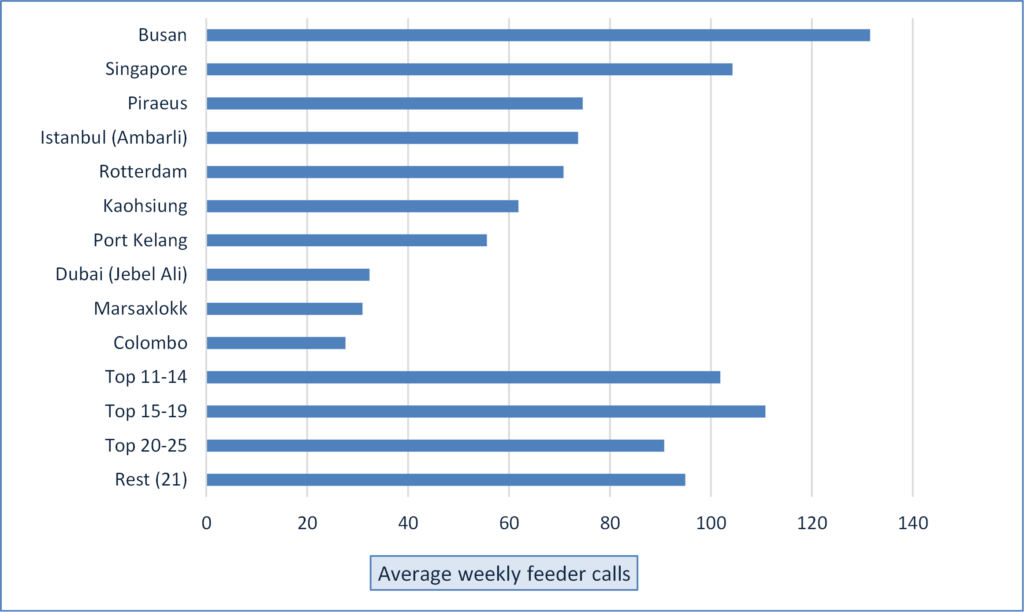 [1] Annual Trade Capacity is a function of service frequency and average vessel capacities with adjustments made for cargo deadweight and any ports visited that fall outside the trade being studied.

The Feedering Analysis has been conducted by Dynamar B.V.

Dynamar B.V., based in Alkmaar, the Netherlands, was established in 1981 in response to a growing demand for business and marketing reports in the maritime sector. Over the years it has expanded and established a network of offices, agents and correspondents across the world. Dynamar B.V. offers a wide range of reports that are tailored to particular market segments.