MAERSK has reassured forwarders fearful their business will no longer be welcome following speculation that the Danish shipping giant plans to drop them and deal directly with shippers, reports IHS Media.

“Freight forwarders have traditionally been – and will continue to be – one of the biggest customer groups occupying space on our vessels,” Maersk told IHS Media.

The statement was a direct response to concerns expressed by forwarders who claim the carrier planned to cut named account contracts and limit forwarders to online spot deals. 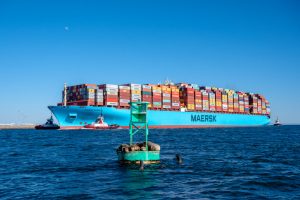 Cutting the named accounts would force those forwarders, and their customers, onto the spot market, where rates are almost nine times higher on both the transpacific and Asia-North Europe trade lanes compared with pre-pandemic 2019.

Forwarders have long regarded Maersk’s desire to become an integrator of global container logistics, a strategy the carrier unveiled in 2017, with suspicion, given that it would make the carrier both a vendor of capacity and a direct competitor.

In mid-December, the rumour surfaced among the forwarding market that Maersk and subsidiary Hamburg Sud from January 1 planned to bypass their named account forwarder base and deal directly with shippers.